Peter Behrens was born in Hamburg (Germany) in 1869.
He studied painting from 1886 to 1889 at the Karlsruhe School of Art, and in 1889 in Düsseldorf, privately, with Ferdinand Brütt.


In 1890 he visited Holland before settling in Munich (Germany).

Member of the secession of Monaco is part of the radical artists of the time.
In 1897, after a visit to Italy, he was one of the founders of " Munich Vereinigte Werkstätten".
He designs covers for Otto Julius Bierbaum's advanced literary magazine, Die Insel (1899), his Der Brunte Vogel (1899) and Pan im Busch (1901).
In 1898 he devoted himself to design and in the following years began to take an interest in graphics and typography, creating a new series of typefaces also known as "Scripture-Behrens". From 1899 to 1903 he taught at the newly established colony of artists in Darmstadt thanks to the intervention of the Grand Duke Ernesto Luigi d'Assia.

1901 was the year of his transition to the applied arts: he stopped painting and started his career as an architect.


At Darmstadt he makes his first house ( House Behrens ) for the exhibition " Ein Dokument deutscher Kunst " where he draws from the structure to each piece of furniture./p>

In 1906 he was responsible for designing the advertising material for the Emil Rathenau's A.E.G. , the large power company in Berlin, where they were employed as designers Adolf Messel and Otto Eckmann. 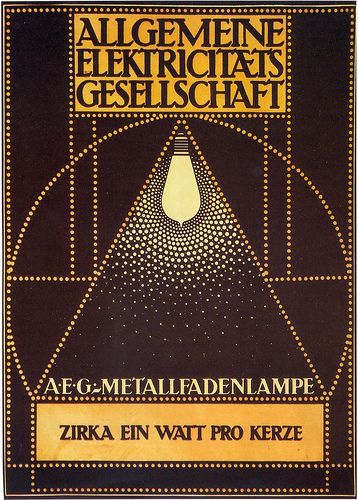 In 1907, called by Paul Jordan , chief advisor of the Allgemeine Elektricitäts Gesellschaft ( AEG ), he became an architect and artistic consultant for AEG in Berlin, with tasks ranging from the design of letterheads and industrial products to architectural design. It will remain there until 1914. For A.E.G. draws the first company logo, and uses it for A.E.G.
From the artistic advertising his work is transformed in the realization of the image of the company. This marks the birth of the "corporate identity" (corporate image). Behrens is the pioneer of this concept and puts it into practice.
His long relationship with W. Rathenau , in addition to allowing him to carry out an activity of exceptional breadth, places him at the cutting edge of the process of ideological renewal of the role of architect and designer in modern society.
During his professional career, Behrens has the opportunity to work in contact with other important architects such as Le Corbusier (1887-1965), Gropius (1883-1969) and Adolf Meyer (1881-1929) who were part of his study in Berlin.
Also Mies van der Rohe (1886-1969) joins Behrens and works in his studio in Berlin for three years.
In 1921 he taught at the Academy of Düsseldorf, (where he stayed for only one year).
From 1922 to 1936 Behrens directs the architecture section at the Vienna Academy, from 1936 until his death in 1940, he directs the department of architecture at the Prussian Academy in Berlin.
He died in Berlin on February 27, 1940.
In the transition from painting to design and architecture, Behrens follows an evolution in which he abandons the classical language on which he based his ideas of industrial culture to arrive at Expressionism and finally Rationalism with the his last production.

Among the main architectural works: